Sadie, The Deer with the Crimson Coat 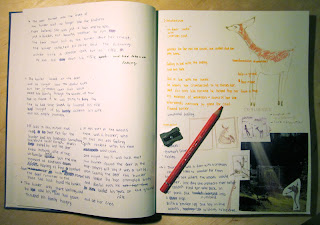 I finally feel like there is something to show. But it is still in the works. I am trying not to show unfinished things anymore but, it has been a while on this one. Here is a little story of the birth of Sadie made from the skeleton of a cat and transformed into a deer. 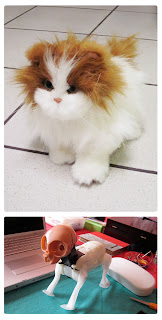 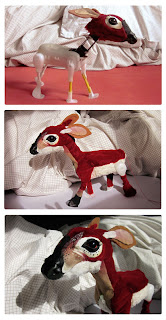 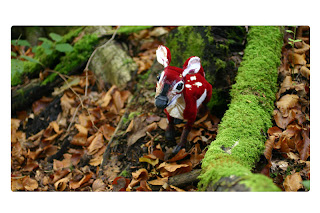 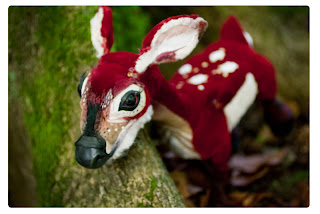 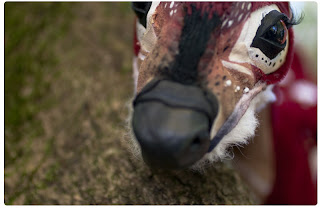 It was as lovely day in the forest. I took some video of Sadie walking but those will come later.

I wrote a story about Sadie. Here is it complete with a storyboard.

The Deer with the Crimson Coat
There once was a deer with a crimson coat. She liked to wander far from home to see where the woods would take her. One day, she crossed a river too far and could no longer return. In a moment of panic she stumbled into a hunter’s trap. She lay there with a broken leg in the woods wishing to be free.
In this part of the woods there was a hunter, who on this day was feeling quite content with his new wool coat.  One might say it was luck that the hunter found the deer, but others will say that it was a curse. Upon seeing the deer, the hunter was taken by her crumpled body and doleful eyes. He laid his rifle on the ground and set her free.
It was in this instant that the deer fell for the hunter and his kindness. Something she had never seen and would never forget. Months passed by and the deer knew nothing else of the unfamiliar land but that one moment of kindness. Hoping to find comfort from this moment the deer returned to the place she had found the hunter.
The Hunter was there waiting and by now his wool coat had grown thin and his family hungry. He looked at the deer and no longer saw the doleful eyes but her crimson coat that would keep his family through the winter. He now had to choose is was going to take the life that he had once saved. He raised his riffle and thought of his children, his wife and his empty stomach.
The deer looked into the eyes are the hunter and no longer saw the kindness from before. She was just a deer and he was just and hunter. Not knowing weather to run, the deer stood still as the hunter shot her in the chest. The hunter collected his prize and returned to his family.
The following Spring the hunter wore a crimson coat but no riffle. He had laid down the weapon that had killed the deer and had taken up fishing.
The End.

Posted by Danielle Buerli at 7:45 AM 2 comments: 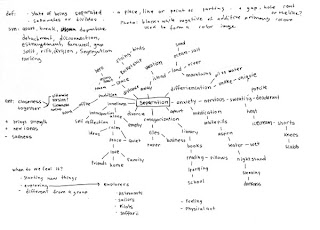 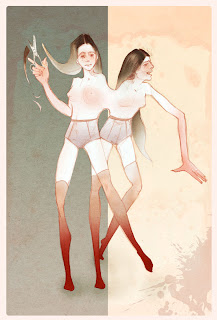 Is it lame to post school stuff? Maybe, but a little something I have been working on. It was more about the process and symbolism I guess.
Posted by Danielle Buerli at 7:12 AM 2 comments:

So In an effort to keep busy and sane I did a little threadless time. If you would be so kind to put in a vote... I would be happy. 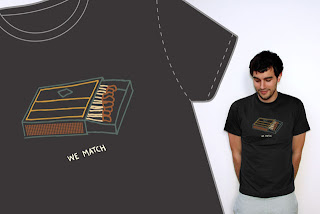 Posted by Danielle Buerli at 2:56 AM 2 comments:

Thanks to the WWA Gallery in Culver City, I did a interview for Juxtapoz Magazine online for their upcoming Horrorwood show.

Be sure to stop by on Oct 15th, there are going to be so many amazing people. 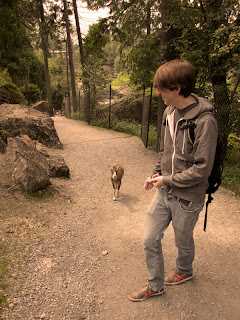 Oh and because I love nothing more than to make work for myself... I have been working a project for while that is finally ready to be shown. Just a little bit. Here is Micheal helping out with some of the research... feeding deer at the Swiss "Animal Park".
Posted by Danielle Buerli at 9:31 AM 1 comment:

What you will find